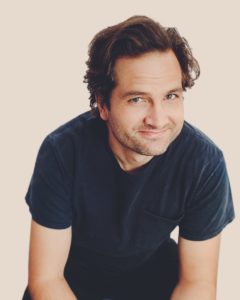 Espe got his start in 2005 opening for the folk duo Storyhill in Minneapolis before dropping out of college to tour on his own. His career has taken him across the U.S. and overseas, playing in coffee shops, bars, churches, and the occasional yoga studio.

As solo artist Espe has self-released five solo albums, a Christmas EP, and several singles. In 2012 Nettwerk Records released the EP Through Frozen Forests, which peaked at #7 on the iTunes Singer/Songwriter chart. His 2015 single “Making All Things New” emerged on numerous Spotify playlists, racking up over 21 million streams under the span of a year. It also won the attention of pop icon Taylor Swift on her self-curated playlist Songs Taylor Loves. Produced by Brian F. Joseph (Bon Iver, Sufjan Stevens), his first full-length album for Nettwerk, Passages, was released in September of 2017. His followup EP Wonder was released in November of 2019. The single “Anytime I Go” was featured in the Stella Artois 2019 holiday campaign. His latest EP, Rock & Roll Man, will be release in February 2021. Its singles “Sunny Day” and “Only Time” have both snagged spots on Spotify playlists like Hanging Out And Relaxing, Fresh Folk, and Infinite Acoustic.

Among other placements, Espe’s recordings have been featured in Grey’s Anatomy, Orange Is The New Black, The Fosters, Hulu’s The Path and the documentary film Where the Yellowstone Goes, as well as commercials by Sainsbury’s, Volkswagen and Toys “R” Us.

A resident of Nashville, Tennessee, Espe does not like to perform live, but occasionally does songwriter rounds at local venues The Basement and Bluebird Café.