After the Ricky Gervais tweet about my song being in After Life, my friend Mark asked how stuff like that happens. So with his permission, I’m going to post our email exchange, in case any of you have similar questions.

Mark: So, if you’ll oblige me, did they pick that song at random and just tell you they were going to use it? Or did they ask you for recommendations on one of your songs that fits a certain mood? Or did you shop this one around recently? I’m so curious how it works.

Me: Happy to oblige! I think my publisher or record label pitched this one. It can happen differently each time. But here’s a general rundown:

1. Music supervisors for show put out a request for music to labels/publishers/music industry folks. The request will have a brief with a bunch of descriptors for mood, tempo, lyrical content, etc.

2. The licensing team (department of a publisher or record label) will cross reference songs in their catalog with those descriptors and pitch those songs.

3. Music supervisor likes a song and sends a formal request to use it, which will be forwarded to all the rights holders for approval. For After Life, it looked like this:

We have a request to clear Aaron Espe’s “Back to the Beginning” for the new series of Netflix’s After Life. Are you happy to approve on the terms below?

Synopsis: Half-hour British black comedy-drama series created by and starring Ricky Gervais. Set in the small fictitious town of Tambury, the show follows Tony a writer for the local newspaper whose life is upended after his wife dies from breast cancer.

5. Wait. (But don’t wait or you’ll go crazy. Just get back to work writing songs.)

7. Music supervisor sends confirmation of use and an airdate (with the caveat that it could still fall through, you just never know, so keep writing songs!).

Within all that are a bunch of mini steps, depending on the case, but that’s the gist of it.

Mark: That is fascinating. Thanks for the play by play. I clearly know nothing about all this so it’s so interesting to learn.

Of course I have questions:

So what Steve/manager does is different than your publisher/record label, is that right?

Also, can you or have you ever declined? Like if it was a show about how great Nazis are or something?

Not to talk details on finances but do they pay based on how big the show is, or how long they use it, or how prominent it is in the show? It’s different I assume if they use it in a commercial/preview for the show versus one little bit of an episode?

Do you see a big increase in streams or purchases after shows air?

Feel free to disregard any of these questions of course, just fun to learn about it. Thanks for your time. Glad more shows are still picking you up!

Of course I have questions:

So what Steve does is different than your publisher/record label, is that right?

Correct. Steve was my manager (we parted ways a few months ago, on good terms). Managers oversee everything. They’re in charge of making sure everybody—label, publisher, booking agent, band, etc.—is moving in the right direction based on the artist’s vision. They look for opportunities and create them. They coordinate with the label and publisher, with the artist’s lawyer. They do it all. Essentially, they’re a buffer between the artist and everything else, so the artist can focus on the creative stuff.

Also, can you or have you ever declined? Like if it was a show about how great Nazis are or something?

Yes, I have declined before. Only a few times. Just recently I did because the supervisor was, in my opinion, acting unethically in the negotiation process. It didn’t have anything to do with the scene. Thankfully, I haven’t had any controversial requests.

Not to talk details on finances but do they pay based on how big the show is, or how long they use it, or how prominent it is in the show? It’s different I assume if they use it in a commercial/preview for the show versus one little bit of an episode?

How much a show pays is based on a lot of things, but the main factors are:

1. Track. The track is the recording of the song. In other words, what song is it and who recorded it. A song written by Paul and John and recorded by the Beatles will be much more expensive than a song written by Paul and John, but recorded by a lesser known artist. Side note: this is why cover songs are so popular and often used in TV shows. The “track” is less expensive, but the words and melody will be recognizable to viewers.

2. Artist. Refer to the above, but basically, the more popular the artist, the more expensive it will be. It was less expensive for the TV show Cruel Summer to license my version of “Unbelievable” than to get the original by EMF. Since EMF members wrote the song, Cruel Summer still needed to license the publishing from them. Intellectual publishing, baby!

3. Duration. How much of the song are they using and how often? In general if it’s more, the fee will be more. But not by much, in my experience. It’s definitely not a 1:1 ratio. But if it’s a lot or in multiple scenes, the artist might have some negotiating power.

4. Media. What types of media will the song be in. Network (ABC, NBC, CBS, etc.)? Cable? Streaming only? Social media, trailers and promos? All of these affect the pay scale and royalty rates. For example, network shows tend to have higher backend royalties because of syndication. Cable pays less, in my experience.

5. Territory. What countries and regions will the song be heard? Only UK or US? The fee may be less. Worldwide/Universe? The fee may be more. Side note: they usually say “Universe” now because you just never know!

6. Term. How long does show have rights to use the song? For commercials it’s usually a certain number of weeks. For TV shows, it’s usually perpetuity because the show in theory will exist forever.

Do you see a big increase in streams or purchases after shows air?

It depends on the popularity of the show, how the song was used in the scene, and whether people have time to Shazam it. Shazam is usually how I find out if the song is getting a bump from the show. But almost always there’s at least a slight bump. Here’s a YTD screenshot from Apple analytics. You can see when “Take You Home” aired on Grey’s Anatomy 🙂 In that case, “big increase” is pretty accurate. 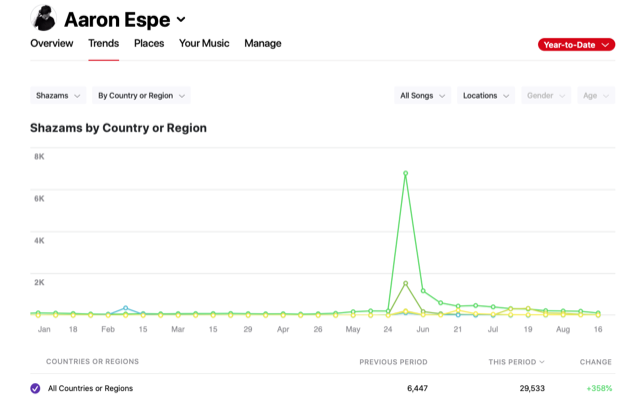 Feel free to disregard any of these questions of course, just fun to learn about it. Thanks for your time. Glad more shows are still picking you up!

Nah, all good! Thanks for asking. It’s always good for me to revisit these things and think through them. Maybe I can use some of this in a future blog post or something (with your permission). Two birds, one stone.

3 ON THURSDAY NEWSLETTER
Get new music, stories, and other goodies in your inbox every week from Aaron:

Life Stories - Reflections on my upbringing, fatherhood, and trying to be a better person.

Mental Health - How I deal with a lifelong journey of anxiety and depression.

Music Industry - What I've learned and am learning as a career artist and songwriter in Nashville.

Baseball - Why I watch the Minnesota Twins.

Recommendations - What books, music, and other things I'm into these days.